The Ontario Rett Syndrome Association (O.R.S.A.) was incorporated on July 26, 1991. Launched from a small group of parents, the organization has grown tremendously over the past 30 years. O.R.S.A. funds 3 Rett syndrome clinics, has awarded over $600,000 in research grants, organizes educational events, runs the Canadian Rett Syndrome Registry and provides resources for families.

To celebrate this milestone, we have launched two podcasts!

Listening To Hope celebrates recipients of grants from The Hope Fund. The first two episodes are available now. We will be releasing a new episode each Monday for the next 4 weeks.

We have just announced our 2021 Hope Fund grant recipients. To date, over $600,000 in grants have been awarded.

We have posted 30 facts about O.R.S.A. leading up to the 30th anniversary. Please subscribe to our social media channels to stay up to date!

The Ontario Rett Syndrome Association (O.R.S.A.) Board of Directors has unanimously approved the funding of two research grants totalling $78,750 from The Hope Fund for 2021. This is the second largest amount approved in a single year and with this release, The Hope Fund has funded over $600,000 in Canadian research to date.

O.R.S.A. has awarded $25,000 plus indirect costs to Dr. Alex Weber’s study entitled Functional, Metabolic, and Structural MRI Findings in Rett Syndrome. Dr Alex Weber is a newer researcher to the Canadian Rett syndrome field. He intends to study white matter differences between individuals with Rett syndrome and age-matched controls, and explore the associations between clinical severity and MRI findings, hoping that this may eventually lead to future targeted therapy. This is a pilot study which hopes to lead to further and larger grants through the Canadian Institute of Health Research.

O.R.S.A. has also awarded $50,000 to Dr Mojgan Rastegar’s study is entitled Targeting the molecular and structural abnormalities of brain cells for Rett Syndrome. She is a two-time past shared-award winner, and a very prominent Rett syndrome researcher in Canada who has shown passion, dedication, and persistence toward Rett syndrome research. Her study plans to explore whether the molecular and cellular changes in Rett syndrome brains affect the brain uniformly or are more region-specific, and to further explore the potential for a current existing drug (metformin) to play a rescue role at a cellular level. This was a well-reviewed research proposal from a well-established Canadian researcher.

The Hope Fund was established in 2014. The funds for this research grant were raised through donations and fundraising activities. O.R.S.A. continues to support research excellence and the development of a wide scope of Rett syndrome research across Canada.

Dr. Alex Weber, as a neuroimaging scientist, applies non-invasive imaging techniques, such as magnetic resonance imaging, to help neuroscientists and clinicians better understand brain health, brain disorders, and potential treatments for brain disorders. His long-term goal is to develop specific and sensitive quantitative biomarkers of anatomical, functional and metabolic characteristics of brain health in newborns and children. Early recognition and classification combined with brain interventions are key in the prevention or reduction of progressive and chronic lifelong disabilities such as cerebral palsy, epilepsy, and behavioural and learning disorders. Currently, objective neuroimaging markers of treatment responses are urgently needed to accelerate clinical trials and focus our search for effective treatments. Over the past decade (four-year PhD, four-year postdoctoral fellow, and two years as an Assistant Professor), he has developed the expertise for a wide range of advanced MRI techniques, and made discoveries in brain health in newborns, children and youth. This work has been widely disseminated through publications, media interviews, presentations, clinical/radiology engagement, and open science avenues.

Dr. Mojgan Rastegar is a Professor of Biochemistry & Medical Genetics, at the University of Manitoba. Dr. Rastegar obtained a PhD degree in Biomedical Sciences from the Université Catholique de Louvain (UCL), Brussels, Belgium, and performed her postdoctoral trainings at the Hospital for Sick Children (Toronto, Canada), McGill University (Montreal, Canada), and Indiana University-Purdue University (Indianapolis, USA). Dr. Rastegar research program is focused on the molecular mechanisms that control brain development and their involvement in neurodevelopmental disorders including Rett Syndrome (RTT). To study RTT mechanism of disease, Dr. Rastegar laboratory uses a combination of murine and human in vivo and in vitro systems that includes primary neural stem cells, human brain cell lines, transgenic mice, and post-mortem human brain tissues. Dr. Rastegar has recently established the Human Rett Syndrome Brain Bio-Repository Laboratory in Manitoba, through the support of O.R.S.A. and private donations. This laboratory currently includes a cohort of male and female human brain tissues from RTT patients at different ages with age- and sex-matched non-RTT human control brains. An objective of Dr. Rastegar research program is to understand how molecular and cellular deficiencies in the human RTT brains lead to the associated disease phenotypes in patients. Her research program further seeks to determine what is commonly impacted amongst RTT patients and other RTT model systems. The outcome of her research studies is expected to identify novel therapeutic strategies for MeCP2-associated rare and common neurodevelopmental disorders that currently have no available cure.

Over the years, Dr. Rastegar’s research program has been supported by national, international, and local funding, and she has published over 50 peer-reviewed papers, 15 of them being on Rett Syndrome and MeCP2. Many of her trainees have been authors of these publications and her students have been successful in obtaining national scholarships including CIHR and NSERC studentships.

Dr. Rastegar is part of Board of Directors at the Canadian Society of Molecular Biosciences (CSMB). She is also an Editorial Board member of reputable journals such as Scientific Reports, Frontiers in Genetics, Neural Plasticity, Frontiers in Cell & Developmental Biology.

Applications for our Board of Directors are Now Being Accepted

The Ontario Rett Syndrome Assocation (O.R.S.A.) wishes to invite interested candidates to submit their application to join the O.R.S.A. Board of Directors. This is a great opportunity to help achieve a better future for individuals with Rett syndrome and their families.

We are particularly interested in hearing from individuals whose experience and skill set includes a combination of the following:

Please submit your application to kmorton@rett.ca.

On March 5th, Ontario released more details on who would be eligible for vaccination under phase 2, beginning in April. This includes individuals with high risk chronic conditions and their caregivers. Adult chronic home care recipients are already eligible under phase 1.

It is likely all adults with Rett syndrome would be eligible to receive a vaccine in phase 2 under one of these categories:

Highest risk – People with neurological diseases in which respiratory function is compromised.

If an individual falls into the highest risk category, one primary caregiver is also eligible under phase 2.

It is advisable to discuss your personal vaccination plans with your primary care provider. The Rett syndrome clinics have no additional details on vaccine rollout.

O.R.S.A. will continue to provide updates as they become available.

Update March 23: Primary essential caregivers are included for individuals in the High-Risk Health Conditions group who require regular and sustained assistance with personal care and/or activities of daily living.

Update April 2: We are hearing reports that vaccine clinics in Toronto have administered vaccines to individuals with high and highest risk medical conditions and one caregiver. For those who have upcoming appointments at SickKids, it may be possible to register for vaccination with University Health Network even if you don’t live in the catchment area. 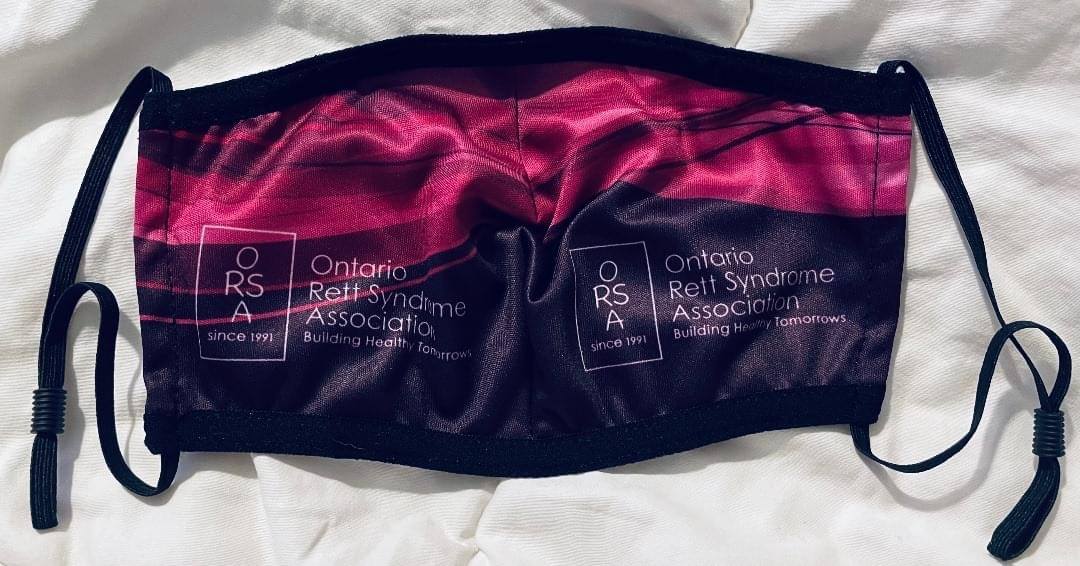 Due to popular demand, our O.R.S.A. branded face masks are now available to purchase in our web store.

$10 per mask available in Adult and Youth. Limit 5 per household. Free shipping anywhere in Canada.